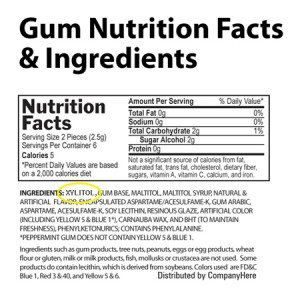 Many products for human consumption contain artificial sweeteners or sugar substitutes. Xylitol is a common sweetener found in items such as chewing gum, toothpaste, sugar-free jelly, and reduced-calorie baked goods. It is shown to possess antibacterial properties and other human health benefits, making it very popular for use in oral health products. To dogs however, Xylitol can be deadly in relatively small doses.

When dogs accidentally ingest products containing Xylitol, the compound is mistaken for glucose by the pancreas. The pancreas is the organ responsible for insulin production and blood-sugar (glucose) regulation. Normally after digestion, insulin is released into the bloodstream to allow the glucose in food to be utilized as the primary source of fuel for cells by driving glucose into the cell. Xylitol promotes insulin release which reduces blood glucose levels causing a condition called hypoglycemia. The symptoms of hypoglycemia include lethargy, weakness, ataxia (loss of coordination), seizures, and coma followed by death. Xylitol induced hypoglycemia can occur as quickly as 30 minutes and persist for days.

A toxic dose of Xylitol is relatively small. The amount contained in one or two sticks of sugar-free gum can cause hypoglycemia in a 22 pound (10 kg) dog. Smaller doses have a delayed onset of symptoms compared to larger doses. The hypoglycemic dose for Xylitol is reported to be approximately 0.2-0.4 grams per kilogram of body weight.

If possible, the animal should be induced to vomit within 30 minutes of accidental ingestion of Xylitol, and the dog should be hospitalized. An intravenous catheter will be placed and replacement fluids will be administered along with glucose as a supportive measure. Because hypoglycemia can be prolonged (days in duration), IV glucose is usually supplemented and blood glucose values are monitored several times a day. There is no medical antidote for Xylitol; it will have to be metabolized and excreted by the body.

Higher doses present another problem, even if the hypoglycemia is corrected. Hepatic necrosis, or the destruction of liver cells, begins to occur at about 10 times the minimum toxic dose. The mechanism of liver damage caused by Xylitol is not completely understood, but internal bleeding due to clotting deficiency is a common result. Complete liver failure and death can rapidly follow. Liver function tests should be monitored for several days after exposure.

Xylitol toxicity in cats has not been reported. It is unknown whether cats tolerate the sweetener, or because of their discriminating tastes, they are less likely to ingest products containing Xylitol. In either case, accidental exposure to Xylitol should be avoided.