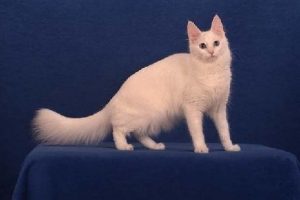 According to legend, Mohammed, founder of the Islamic faith, possessed a Turkish Angora.  Angoras found their way to Europe in the early 1600′s and were exported to America in the 1700′s.  The breed was used extensively in Persian breeding programs to add length and silkiness to the Persian coat.  The Turkish government started a breeding program to preserve the breed in the early part of the 20th century.  Angoras were imported into the United States from Turkey in 1962, and were accepted for championship in the Cat Fanciers’ Association (CFA) in 1973.